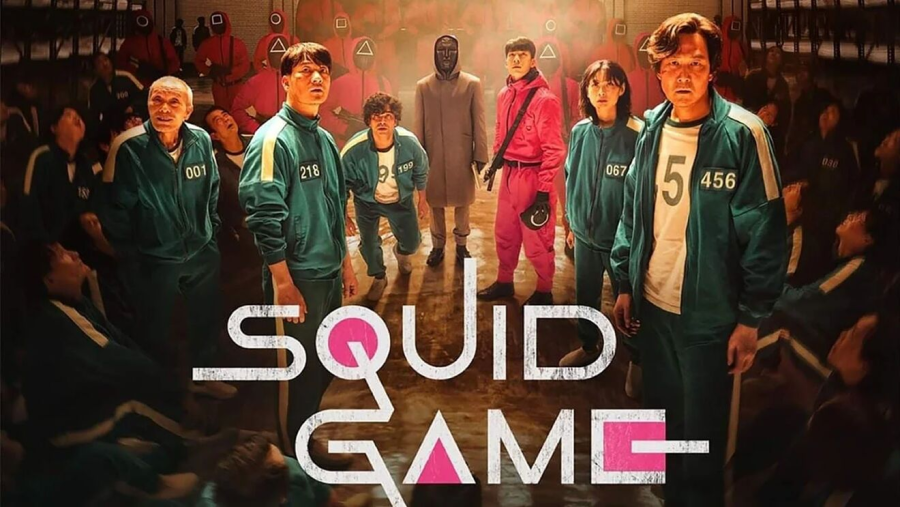 Would you ever put your life on the line for a game of fate? Squid Game takes this to the extreme. Squid Game is a South Korean drama series, released on Netflix on September 17. Squid Game became popular due to its accessibility and the range of languages offered, including 37 available subtitles and 34 available dubs. The show could also have gained some popularity due to the amount of gore it displays. Due to the gore, violence, and explicit scenes, the show is rated TV-MA and described as unsuitable for children under 17.
The series is similar to the movie Saw as it displays multiple people playing ‘games’ with the consequence of death as a punishment for losing. Although the film is a thriller, it portrays the inequalities of capitalism on a deeper level. 456 desperate contestants sign away their lives to pay off their incredible amount of debt. They play children’s games and are ‘eliminated’ if they lose, with only one winner remaining in the end.
Squid Game also has a mysterious aspect to it. The hosts and guards running the games are anonymous. They are not allowed to reveal their faces to each other or any of the contestants, with the consequence of death if they do. The Host of the game is unknown until the final episode. The Front Man is second in command, right behind the host. He has a distinguished black suit as opposed to the red suits all the other guards wear. The guards are also organized in a sort of hierarchy by the shapes displayed on their face masks. There are 3 shapes displayed on their masks; circle, triangle, and square. The majority of the guards are in circles and are known as straight-forward workers. They obey everyone else’s orders. The square can order the circles around, but they take orders from triangles. The triangle takes orders directly from the Front Man while the Front Man takes orders from the host.
Though the guards seem to have more power and freedom than the players, it is later revealed that their conditions are similar. The guards seem to be there because they have to, not by their free will. They have a bedtime and a headcount in the morning. Their temporary living quarters are small with only the essentials in their room. Both the guards’ and the players’ conditions are similar to that of a prisoner. The living conditions of the guards give the show a more mysterious aspect, as it is unknown why they are treated like prisoners and what they did to be put there.