The Blue and Gold • September 22, 2021 • https://blueandgoldnewspaper.com/the-decades-at-trs-2021-homecoming-dance/

The Decades at TR’s 2021 Homecoming Dance 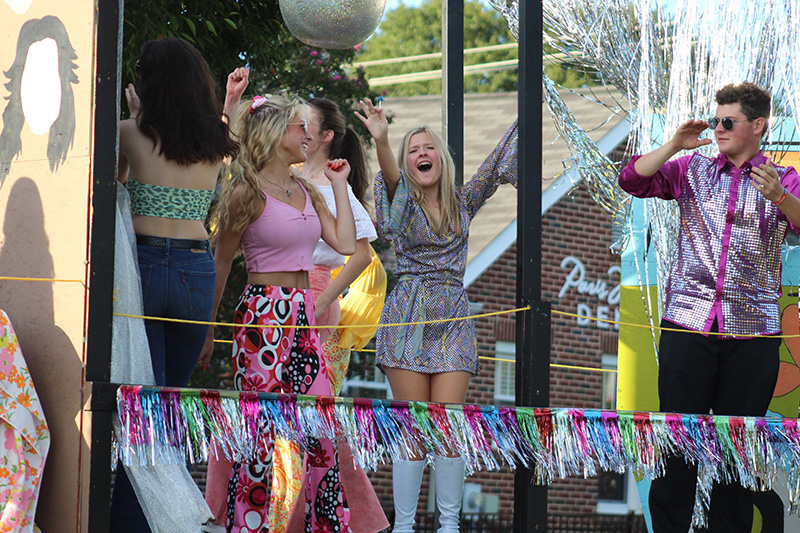 One year into the 2020’s and the current decade has already had its trials and tribulations.  Excluding the obvious (haven’t we all had enough of that?), 2021 has featured 90s and 2000s fashion trends, controversial albums by popular hip-hop artists, and a serious sparseness of new movie releases.

On the Saturday of 9/11, Travelers Rest hosted its first school sponsored dance since March of 2020.  TRHS homecoming of 2021 focused on the decades: the dance itself was themed in the 1920s, while each grade level was challenged to channel a different decade of the 1900s.  Imagine the dance floor as a collage of style and color.  Now, after the occasion has passed, it’s important to examine the overall context and pop-culture greats of each decade our TRHS students handled.

Current clothing trends give us a window into life in the 1990s.  Nineties style toned down vibrant 80s palettes in favor of blue denim, baby tees, and lots and lots of flannel.  In a similar fashion, 90s media is more subtle but equally impactful.

The 1990 premiere of Pretty Woman starring Julia Roberts kicked off a new decade of film in a whirl of romance.  In December of 1997, the hit drama Titanic followed suit.  At the time, Titanic was the most expensive movie ever made: a shocking $200 million in total production cost (one pricey cry-along).  Contrastingly, the late 90s is characterized by sci-fi and action powerhouses.  The release of Saving Private Ryan in 1998 all but defined the action and war genres.  One year later, the Star Wars franchise began its prequel trilogy with Star Wars: The Phantom Menace.  And, barely two months before, The Matrix starring Keanu Reeves reinvented dystopian sci-fi.  Nineties movies (action and romance) were backed by tracks from its queue of iconic artists.

From start to finish, the 90s was a decade marked by grunge and punk rock, and other offshoots like ska and power pop.  Nirvana’s Nevermind was released in 1991, skyrocketing the group’s popularity and boosting their hit song “Smells Like Teen Spirit” onto Billboard’s Hot 100.  The Red Hot Chili Peppers wrote “Give It Away” the same year, earning the group’s first Grammy for “Best Hard Rock Performance With Vocals” in 1992.  And Gwen Stefani, fronting No Doubt, began her career of fame when the band released their second album, Tragic Kingdom in 1995.  The punk rock and hard rock artists of the 90s introduced an edgier element to the mainstream music industry.

Our freshmen are tackled a wild 10 years- the 90s has a certain grungy chic that is unrivaled by any decade post or prior.

The 1950s, the earliest decade chosen for the line-up of themes, belonged to our sophomores.  Fifties fashion showcased sharp silhouettes and plenty of recognizable looks.  Women wore dresses with cinched waists and angular knee-length skirts.  Men dressed in snappy suits with skinny ties or suspenders (not to mention the leather jacket, white t-shirt, and blue denim greaser combo).  However the 50s isn’t particularly remembered for its style, but for the origination of artists that are celebrated to this day.

Just one of these noteworthy figures: Elvis Presley released his debut single, “That’s All Right” in 1954.  Two years later, Elvis produced his first album (self-titled Elvis Presley) and quickly gained popularity.  Elvis, later dubbed “The King of Rock and Roll” is still an iconic image today.  Moving on to vocal groups, The Platters (a personal favorite) were an extremely successful doo-wap band in the mid to late 50s.  Their hit love songs “Smoke Gets In Your Eyes” and “Twilight Time” are swoon-worthy ballads that tell very different stories of romance.  Other memorable 50s artists include Paul Anka and The Penguins.

The 50s was mostly defined by its artists and tunes, but our sophomores got to experiment with other aspects of the decade like fashion and vibe for their homecoming outfits.

The 1980s was a decade of bold: climbing perms, thick shoulder pads, and a plethora of neon.  Everyone and their mothers were rocking wild curls and high-waisted pants.  Besides fashion, the 80s flaunts some of the most memorable movies and music of the past hundred years.  Let’s hop in the silver DeLorean of time and break down the decade-defining media of the 1980s.

Eighties film includes dozens of teen, romance, and sci-fi staples.  In spring 1983, The Outsiders premiered, thrusting many young actors into their careers of fame.  To name a few: Ralph Macchio, Tom Cruise, and Patrick Swayze starred as members of Ponyboy’s family and greaser gang.  The early 80s also contributed two more Star Wars movies (The Empire Strikes Back in 1980 and Return of the Jedi in 1983) to an increasingly iconic lineup. Then, from 1984 to 1986, John Hughes stole the screen with a succession of teen films turned modern-day classics.  Sixteen Candles (1984), The Breakfast Club and Weird Science (1985), and Pretty in Pink and Ferris Bueller’s Day Off (1986) are time capsules of fashion, slang, and music.

As for music: the 80s had no lack of iconic artists in name or voice.  Whitney Houston, Michael Jackson, and Prince were topping the charts with anthems most current teens can recognize by intro.  AC/DC’s Back in Black and Michael Jackson’s Thriller were best-selling cassettes in the early 80s, and The Beastie Boys and Guns N’ Roses ruled 1986 and 1988, respectively.

With the setting in mind, we were excited for our TRHS Juniors to take on the wild 80s for this year’s homecoming dress code.  If we could have offered one piece of advice?  Go bright, boxy, and bold.

The 70s was a distinct time for fashion.  Both men and women donned bell bottoms and other flared jeans, blazers, and denim on top and bottom.  As for feminine style the ladies wore midi skirts and maxi dresses, but for the first time, mainstream fashion was becoming more androgynous.  The 70s was also a decade of “firsts” in media, including literature and movies.

As far as books go, we can thank the 70s for the emergence of Stephen King.  Earning a paycheck as a teacher and janitor, King published his first book Carrie in 1974.  The novel was an immediate success and in 1977, King went on to write one of his most popular horrors, The Shining.  The 70s was also a first for popular children’s and middle-grade storyteller, Judy Blume.  Between the cusp of decades- in 1970- Blume released Are You There God?  It’s Me, Margaret, (her first young-adult novel) which aged as one of her most influential works.

A dramatic first in the film world: Star Wars (later titled A New Hope) premiered in 1977, kicking off arguably the most significant franchise in sci-fi action history.  The saga’s debut movie was met with runway success and would later become the 70s’ highest grossing title by almost double its runner-up, Superman.  Grease, another popular 70s film (with a 50s theme), was released one year later in 1978.  Not only appealing to the younger 70s generations, but establishing itself as a timeless classic, Grease remains the most successful musical-movie of all time.  On the charts, the Grease soundtrack held its own against new releases from incredibly prominent 70s artists (songs by The Beatles, The Eagles, Pink Floyd, Elton John, and countless disco-greats).

While 70s “firsts” might seem dated to us, our seniors were challenged to bring on the nuanced energy of the disco era in both outfit and attitude.