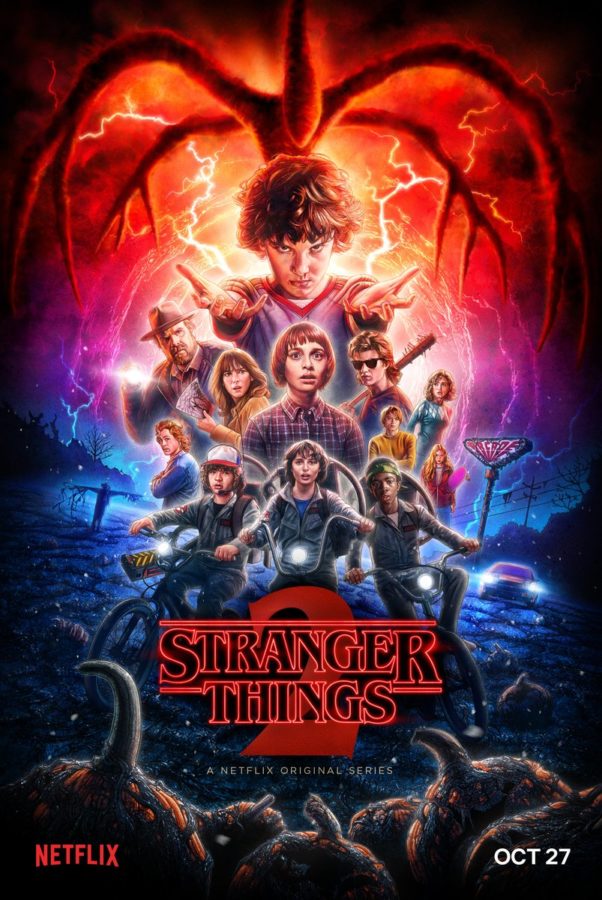 Stranger Things 2 poster for the season

This year’s Halloween festivities brought a new season to the award-winning Netflix original: Stranger Things. The second season brings character development, suspenseful moments, and answers to questions from the previous season. Chapter two continues the adventures of four middle school boys and their interactions with new companions and the strange activities in the town of Hawkins, IN.

Set one year after the first season ended, the second season starts with an unrelated plot line that leaves watchers curious before it’s addressed in a later episode. On the other hand, this mysterious clip is a segway for more seasons to come. The main plot line continues after showing the boys at an arcade, attempting to reclaim the high score on a game that another player had taken from them. As they are playing, one of the boys by the name of Will Byers, played by Noah Schnapp, gets an ominous vision that takes him to an alternate dimension. His friends and family spend the rest of the series attempting to understand what is happening to Will and later, the entire town.

The second season has more dramatic sequences, suspenseful moments, and the actors seemed more devoted to their roles. The teenage actors matured enough to make the second season rise above the first. Millie Bobby Brown’s character, El, had one of the most impressive performances. Her peculiar and dramatic persona adds to the town’s mystery and sets the tone for the season. She also has many more speaking parts in the second season which helps watchers understand her bizarre character and how she fits into the puzzle.